Chat with us, powered by LiveChat
Skip to content Menu Close 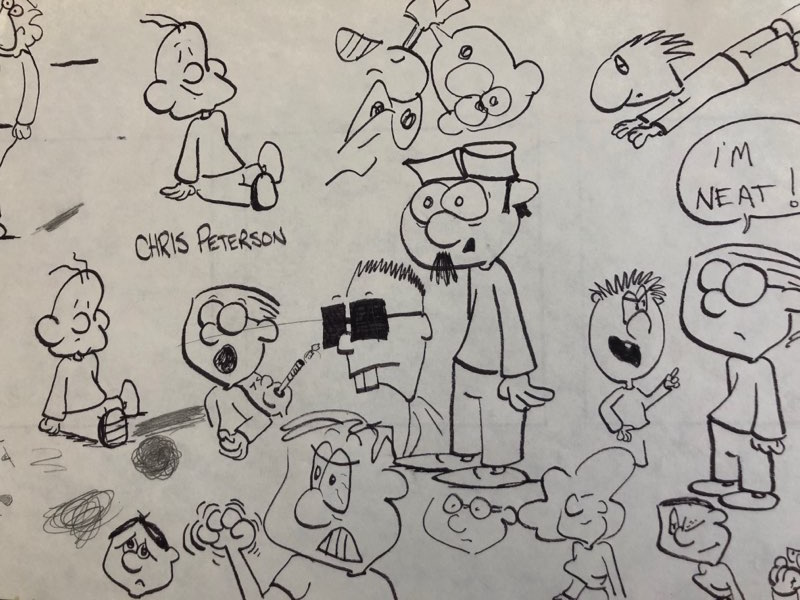 Weirdness is often a lifelong condition.

“There’s a family story about me looking up at the sun through my hands and having the ants bite me on the neck,” said Chris Peterson, PayGo CEO, and Chief Weirdo in the building. “I was probably three, or four. People thought it was a little strange that I was doing that, but my Grandma said not to be concerned, that I was just fine and that I was thinking and figuring things out.”

Props to all savvy and sage grandmas everywhere. You rock!

Q: When did you first realize that you’re weird?
A: People used to tell me I was weird in elementary school. I don’t think I ever took it in a mean way. I could definitely tell that they were pointing out that I wasn’t very normal. I’d space out a lot — thinking about things.

Q: How’d you handle high school as a weirdo?
A: I was always thinking of something that would be big and different. Darrin (a good friend with his own weirdo creds) and I would make off-the-wall different comic strips. We wrote comics about each of us having empires that we ruled over things. It was like in medieval times.

Peterson has always had entrepreneurial sensibility. When his friend Darin came up with a cartoon called Dunce Duck, Peterson thought of a way to monetize it. “We could have people pay us to make posters of Dunce Duck doing things like playing baseball, or skateboarding. We had three or four people pay us a few dollars each for that.”

By the time he was in college, Peterson wanted to be a cartoonist. “I wanted to develop a comic strip.”

Requests to demonstrate this cartooning ability at the company talent show have so far gone tragically unheeded. Yet his comic strip stylings can be viewed throughout this post.

When weirdness and responsibility collide…

Q: Switching from a comic strip creator to a software CEO seems drastic. How did that happen?

I understood computers more than most people around me, so I thought I could make money consulting people about computer stuff. I figured it’d be best to build a career in computers and then go back to cartooning later on, so I went into IT.

When I was an IT manager, I took a side job designing software for quilt shops. The software business I was designing for on the side had some unresolvable issues. So, I decided to start pursuing the business stuff myself. I was always thinking of weird, big business ideas.

“The whole reason PayGo has its name is that my weird plan when I went off on my own was that software should be pay as you go. Pay as you use it,” said Peterson. “In 2002, it wasn’t common at all to pay for software that way.”

Sometimes it’s frustrating to always be wanting to do things different, because that doesn’t always equate to security and calmness and serenity. But, I feel my best and most natural when I am pursuing new and different ideas, and working on something new and different.

As far as weirdo customers go…

“I always love talking to people who are trying to do something different and looking for a different way to approach things,” said Peterson. “It’s a needed aspect of any successful society. You have to keep moving forward and finding better ways to do things. It takes a different way of thinking to solve an ongoing problem.”

Have you heard the news?

PayGo wants to reward weirdos! Are you one? Check out the details on how to enter before Feb. 22nd and you could win PayGo cash. PayGo Weirdos Win Contest.